10 Things That Will Shock Guests When They Visit Silverwood

Sadly our summer season has come to an end, but it’s never too early to start making plans for next season! If you have just moved to the area, have never been to the park before, or even if you are a commited season pass holder, these 10 things about our park might be shocking. There are many options on where to take your next summer vacation, and we hope that you might think of visiting us after getting to know us a little better.

No, We Are Not Surrounded Only By Corn Fields and Potato Farms

Idaho potatoes are mostly grown in the south, and we are located on the northern panhandle surrounded by mountains, lakes, and thick forest land. That is actually where our park name came from. Our area is surrounded by forest land and silver mines. This makes the perfect summer destination for camping, boating, fishing, and riding coasters of course! If being outdoors is a part of your summer bucket list, we do have a campground on site just steps from the park! These spots do fill up fast, so make sure that you make your reservation as soon as possible. Reservations are available online starting in January.

From Airstrip to the Largest Theme Park in the Inland Northwest

Silverwood Theme Park unbelievably began on a small airstrip. Once we found our old Engine no. 7 at an auction in Reno, NV we then began transforming into the theme park that you know and love today. For an in depth history of the park, check out or blog post A Step Back Into Yesteryear.

Family owned theme parks are rare, and we are proud to be one of them! This aspect of the park is shown through our strive for quality. Whether it is our breathtaking landscape or our hand pressed hamburgers, Silverwood is an experience like no other. Gary Norton, the owner and founder of the park, is still part of the day to day operations.

Has Over 220 Acres Of Fun With Over 70 Rides, Slides, Shows and Attractions

There is many ways to spend your day once you step through our gates. Indulge yourself in some tasty treats, drop underground on Tremors, or splash down Avalanche Mountain. We have something for every member of the family. Every detail of the park, from how the bricks in the courtyard are laid out to the quality of meat in the hamburgers, has been important in creating the ultimate guest experience. It all started with a train, and now there is so much to see and do! You can experience world-class coasters, hair-raising attractions, kiddie adventure, a 1915 steam engine train, live award-winning entertainment, restaurants and more! You can cool off at Boulder Beach Water Park with two massive wave pools, thrilling water slides, children’s water features, VIP cabanas, and an endless lazy river. 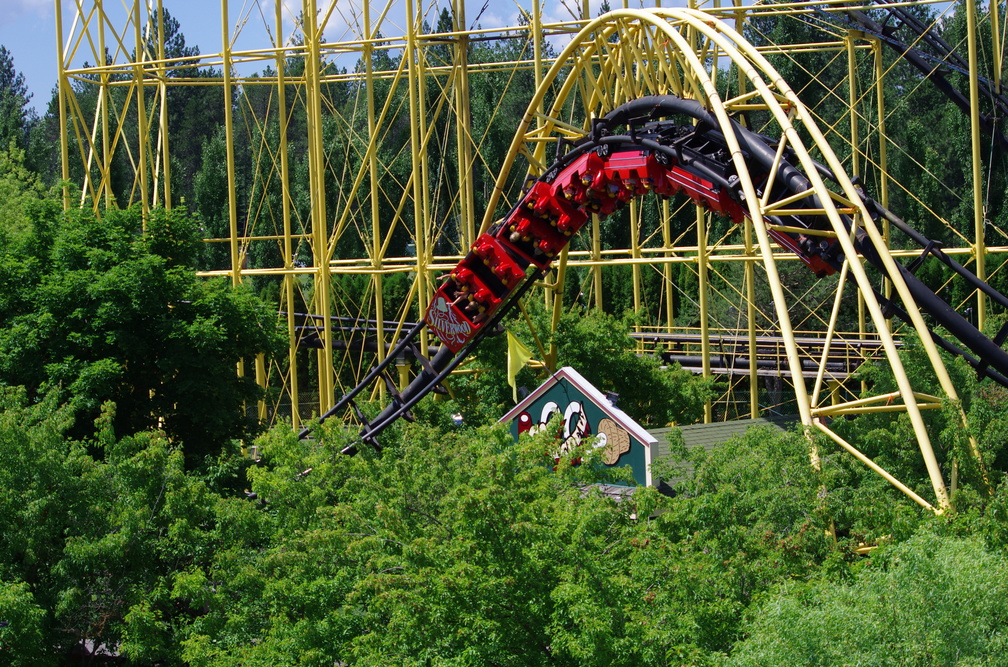 We Have The Very First Modern Roller Coaster That Takes Riders Upside Down!

Originally opening at Knott’s Berry Farm in 1975, the Corkscrew was the first modern inverting coaster. This amazing coaster was also the first to take riders upside-down not once but twice as they moved through the double helix that is the highlight of this coaster ride. In 1990, the Corkscrew found its new home here at Silverwood and continues as a little piece of history and a thrilling ride that people will enjoy for a while to come. Now, Corkscrew has been at Silverwood longer than it was at Knott’s.

We Outbid the Walt Disney Company for Old Engine No. 7

The Porter steam locomotive began life in 1915 as Eureka-Nevada’s second No. 7. It ran from Eureka, NV to Palisades, NV between mines, hauling miners and equipment, and served in that capacity until 1938 when Eureka-Nevada ceased operations. By 1961, it had become part of the Bill Harrah collection in Reno, NV where it was rebuilt and restyled to resemble an older locomotive.

When the Engine was at auction in 1986, the price reached $250,000, and only two bidders were left. Gary Norton and a rep from Disneyland. Disney was looking for more tractive effort and #7 fit the bill. Nevertheless, the bidding war ended, and we got the train.

Silverwood’s guests come from all over the country, but most of them come from our neighboring states and provinces. The majority of our visitors come from Spokane, Tri-Cities and Seattle. Here is a map to show where everyone around us is coming from. Comment below where you and your family travel from to visit us!

A Few Zoo Animals Have Called The Park Their Home

We started by purchasing a full-grown African lion named Leonard. He was acquired by someone that raised the cat from a cub. Next was the more “famous” addition to the park. Tigger, the Bengal tiger cub, was raised here. As tigger started growing, he became more and more playful. Just like most cats, he loved to chase and bite. But when a giant tiger bites, it’s not as fun as a kitten. Eventually, we found better homes for these animals at zoos, or gave them to professionals.

We Hire Around 1,500 Cast and Crew Members Each Season!

Every summer hundreds of thousands of guests flock to Silverwood Theme Park expecting to have good family fun and none of that would be possible without a happy, well-trained staff to greet them. Each season we fill positions ranging from Cooks, Cashiers, Ride Operators, Game Attendants, Lifeguards, Security, Guest Service, Custodial, Restaurant Servers, Bartenders, Pavilion Group Servers, Seasonal Supervisors and more.

Located Close To The Most Beautiful Small Town In America

USA Today and Rand McNally named Sandpoint, located just North of Silverwood, the entire nation’s Most Beautiful Small Town and it’s not hard to see why. Next time you are visiting the park, make sure you plan a short drive to Sandpoint.

There you have it! There are just some of the many facts about our park. If you have any other fun facts that you would like to share, or just want to share how excited you are for next season, make a comment below! If you do, you could get the chance to win tickets for next season!